There where thousands of people crammed into Pioneer Courthouse Square and no Dave Chappelle anywhere. But there were definitely plenty of jackass fans, some traumatic underage boob flashing—seriously, I really didn’t need to see that—and a bunch of suburban kids with not much else to do on a lazy Tuesday night. So, yeah, Twitter failed and it was all a hoax…

…that is, until Dave Chappelle (and the world’s smallest amp) showed up.

(via The Portland Mercury)

This is a really cool story wrapped in a really cool story. If you hadn’t heard from the flurry of Twittering about it yesterday, Dave Chappelle made an impromptu appearance at Pioneer Courthouse Square in Portland, OR – an appearance he had planned to make in front of a very small crowd and only told *five* people about. One of those people must have gotten on Twitter at some point, and by the time the concert was supposed to start, *four thousand people* had filled “Portland’s Living Room” waiting to see Dave. And show, he did. With a practice amp, a microphone, and an awesome attitude, he showed up to a crowd much larger than expected and did a damn good job keeping the crowd in good spirits despite barely being able to broadcast his voice to the first couple rows of people, let alone the entire square.

Here’s a clip of a great article written by a local news anchor, Joe Donlon, about his experience meeting Dave Chappelle while he was in town:

I introduced myself, and said, “So, it’s true. You ARE here. Everyone’s talking about it, you know.”  He was gracious and courteous – but clearly cautious when he heard I was a news anchor.  That’s why my next question probably wasn’t the best.  “What are you doing in town?”  He cocked an eyebrow – gave me that classic Dave Chappelle look – and said, “You’re a journalist?  I’m not sure I want to answer that.”  Fair enough.  So we moved on to other things – after I convinced him that I literally just happened to walk past.

I started with the rumor of this midnight show.  He seemed genuinely surprised, and said – “How did you hear about that?”  I told him about all the chatter we’d been hearing on Twitter and elsewhere – and he seemed almost stunned.

He then asked me about the local TV business.  We talked about the dwindling ad revenues, the layoffs, the cutbacks, and the bankruptcies – and he was truly intrigued about the money, and where it all went.   We talked about how people consume their news, the impact of the internet on that consumption, and our mutual admiration for Ted Koppel.  He also added his take on the difference between ‘news’ and ‘journalism’ and the changes he thought had killed ‘good journalism.’ 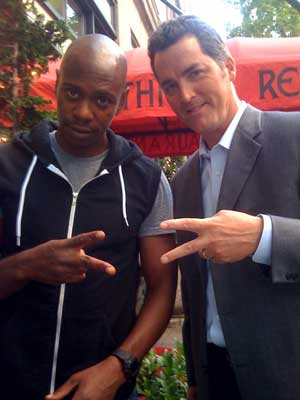 via My Chappelle Show – KGW Anchors .

If you’re still curious, here’s a video of his performance:

And, of course, some links to the flurry of articles about the event:

Dave, if you’re reading this – you’ve got plenty of fans in Portland that would love to see you come back for a show whenever you like. =)

Fascinating read, by quite an eloquent journalist:

The wide, smiling face of Sheikh Mohammed – the absolute ruler of Dubai – beams down on his creation. His image is displayed on every other building, sandwiched between the more familiar corporate rictuses of Ronald McDonald and Colonel Sanders. This man has sold Dubai to the world as the city of One Thousand and One Arabian Lights, a Shangri-La in the Middle East insulated from the dust-storms blasting across the region. He dominates the Manhattan-manqué skyline, beaming out from row after row of glass pyramids and hotels smelted into the shape of piles of golden coins. And there he stands on the tallest building in the world – a skinny spike, jabbing farther into the sky than any other human construction in history.

But something has flickered in Sheikh Mohammed’s smile. The ubiquitous cranes have paused on the skyline, as if stuck in time. There are countless buildings half-finished, seemingly abandoned. In the swankiest new constructions – like the vast Atlantis hotel, a giant pink castle built in 1,000 days for $1.5bn on its own artificial island – where rainwater is leaking from the ceilings and the tiles are falling off the roof. This Neverland was built on the Never-Never – and now the cracks are beginning to show. Suddenly it looks less like Manhattan in the sun than Iceland in the desert.

Once the manic burst of building has stopped and the whirlwind has slowed, the secrets of Dubai are slowly seeping out. This is a city built from nothing in just a few wild decades on credit and ecocide, suppression and slavery. Dubai is a living metal metaphor for the neo-liberal globalised world that may be crashing – at last – into history.

(via The Independent: The dark side of Dubai)

Do you need any more info? 😉

If you go to Japan and tell people you’re a blogger, they might assume you’re a celebrity. While blogs are making incredible headway as a source of credible information in the United States, in Japan they are mostly thought of as high-profile diaries.

“It’s an evolution of Japan’s diary culture,” which dates back to the 8th century, says Ichiro Kiyota, an editor at Gizmodo Japan. “Celebrities say things on blogs that they can’t tell the mainstream media, and we all read it so we can get to know them better.”

Japan’s celebrity bloggers run the gamut in terms of popularity and topics they write about, but they have several things in common: They’re good-looking, they’re geeky and they love to blog. Here are our 10 faves.

I think this may have been bumped off by now, but it was there for a little while!

You might need to click into the image to read it; I’m the second from the bottom on the left of the “News Departments” section, listed “In Technology” for the Gmail Blog: Outage Explanation article. Woot!